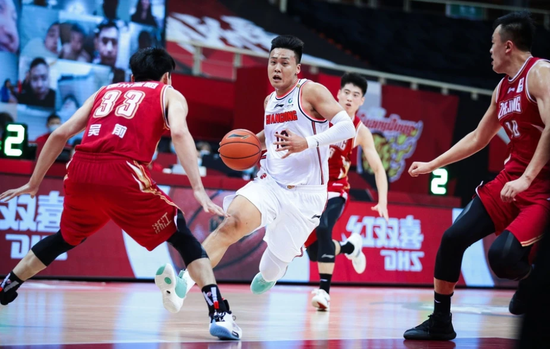 Two days in the weekend, the new season CBA reignited the war. Against the background that the epidemic has not yet ended, the restart of CBA was a good thing for joy, but it was an unexpected storm that caught people off guard.

Many fans who plan to use mobile devices to watch CBA were surprised to find that Tencent and Youku of the three broadcast agencies last season were unable to watch this season's CBA, and Migu became the only broadcast platform.

There is nothing wrong with this. After all, Migu has bought the copyright of this season's CBA heavily, but the problem lies in the quality of Migu's broadcast. The picture quality, fluency, and level of commentary are disappointing.

Angry fans spread their grievances on social media. Under the official CBA Weibo account, many fans directly scolded, and the scolding far exceeded the discussion about the content of the game. The scene was very embarrassing.

Then, why this seemingly normal business behavior caused an uproar? What are the unknown stories in it? The old driver will take everyone to talk about this today——

In the past three seasons, CBA has three network broadcasters, namely Tencent Sports, Youku Sports and Migu. The copyright value is 500 million per season, and the three bear 1/3, which is less than 170 million. The annual copyright revenue of 500 million yuan accounts for about half of CBA's total revenue.

But as far as I know, all three broadcasting organizations are losing money. Even Tencent, the best-runner of these three, has a loss of more than 100 million yuan on this project every year.

This summer, Migu took the lead in renewing the contract with CBA. Although the specific amount was not disclosed, the copyright part of the expenditure is about 250-300 million yuan per year. This virtually sets a price for the copyright price of the new cycle of CBA.

Youku Sports gave up early, but another broadcast organization, Tencent Sports, has been hoping to continue to broadcast CBA. But the problem lies in this price.

I believe that CBA did not reject this plan at the time, because if CBA said at the beginning that we did not consider this plan, we can only buy all of it, then there will be no later things.

Due to well-known reasons, the CBA experienced high-level turmoil in the summer. Zhang Xiong took over the position of CEO. It can be seen that the start of the new season is close at hand, and the copyright issue can no longer be delayed.

On the one hand, it is Migu, which spends a lot of money to buy all the copyrights. On the other hand, it is Tencent Sports, which has obvious advantages in broadcasting quality and coverage of people but cannot afford the copyright.

Actually, as far as I know, CBA was initially optimistic that Tencent could live broadcast. They handled more than 50 certificates for Tencent in accordance with the standards of broadcasters. Tencent Sports was also listed as a broadcast partner in the first edition of the press card.

In fact, Tencent has never given up. According to senior media person Su Qun, until an hour before the opening game, Tencent still hopes to broadcast the CBA this season. But until the last moment, CBA was still undecided, so there was it, Tencent could not live broadcast, Migu had a poor experience, and fans were angry and scolded.

To be fair, this kind of situation was impossible in the early years when the Basketball Association was in charge of the CBA, because the quality of broadcasts was relatively close, and network broadcasts were still in a wild stage.

But the problem lies in the fact that in recent years, relying on the experience of broadcasting NBA, Tencent Sports has greatly improved the viewing experience. Fans who have watched NBA broadcasting will feel all the feelings, and allow fans to adapt to watching most of the games for free, in order to watch another part. The habit of buying members for competitions.

On the other hand, Migu, although he paid a lot of money to buy the copyright, the quality of the broadcast was terrible due to insufficient experience in sports and insufficient experience. Their membership strategy is similar to that of Baidu Netdisk, in that users pay for a smoother viewing experience. This has never been used in the sports broadcast market, and users cannot accept it in the short term.

Fans who are accustomed to eating delicious delicacies, and then let them taste rough tea and light rice, it is indeed difficult to swallow.

A game without a winner How does CBA break the game?

At present, the most embarrassing thing is that the tripartite CBA, Migu, and Tencent Sports seem to have done nothing wrong, but all of them are losers.

As for CBA, since there are funders who are willing to pay, as a business alliance, I have made a choice that maximizes the book benefits for me. What is wrong?

For Migu, in order to expand my 5G business, I paid a high price to buy the copyright, thereby increasing the number of my users. What's wrong?

As for Tencent Sports, the previous broadcast business did not conform to the business logic and was unable to continue. I paid less money, broadcast less games, and lost less money. What's wrong?

But the reality is--

As for the CBA, the number of online viewers has decreased drastically. In recent years, the improvement in broadcast quality has disappeared. In the long run, it will even affect the sponsor’s judgment on the competition, which will reduce the value of the league’s brand. Lead to a decrease in income.

For Yu Migu, he spent a lot of money, but he was scolded by the sky. In the short term, he could not improve the quality of the broadcast. The reputation of fans did not rise but declined, the goodwill declined, and the increase in the number of users did not match previous expectations. Unsustainable.

For Tencent Sports, a large number of users are lost, resulting in loss of customers, reduction in revenue, and restrictions on other business models such as membership.

In my opinion, the most fundamental reason for this situation today is that the current development stage of CBA is not enough to support only one broadcaster.

You must know that the current appeal of the CBA League is not enough to allow fans to make an exclusive choice. To give the simplest example, in the past two days, during the first round of the game, Weibo and Moments swiped the screen of the League of Legends World Championship S10, and there was very little discussion about CBA.

Seeing that Tencent fans do not have live broadcasts, I am afraid they will not download Migu videos to watch CBA. Instead, they will choose to watch Huya, Douyu, Tencent, and B station S10 which are all live.

We cannot be an ostrich with its head buried in the sand. If CBA wants to reach more users, it must use the power of the media more.

So objectively speaking, live broadcasts on platforms such as Tencent and Youku are of great benefit to the wider spread of the current CBA.

Especially this year, affected by the epidemic so much, all industries are struggling to recover. CBA should shoulder not only itself, but the mission of the entire Chinese basketball recovery.

So, how to break the existing deadlock? There are no more than two ways. Either Migu quickly improves the quality of the broadcast to at least allow fans to accept it; or introduces broadcasters such as Tencent and Youku, even if they appropriately reduce their broadcast fees. Let these powerful platforms with audiences contribute to the development of CBA and even the entire Chinese basketball.

In such a difficult season, this choice is particularly important.